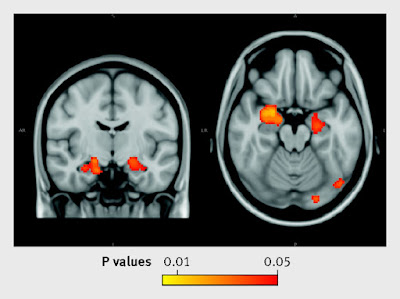 “Even drinking a moderate amount of alcohol can cause brain damage over a prolonged period of time, scientists have said. In a study of more than 500 adults over 30 years, researchers found people who drank between 14 and 21 units per week were three times more likely to suffer from hippocampal atrophy—damage to the area of the brain involved in memory and spatial navigation.

“The effect of heavy drinking on brain function has long been known. But what impact drinking within government guidelines has on a person’s brain health is not well understood. In the latest study published in the BMJ, researchers from the University of Oxford and University College London looked at the impact of moderate alcohol consumption on the brain…” (Alcohol and Brain Damage: Moderate Drinking Linked to Cognitive Decline, 07 June 2017).

“…What is already known on this topic:
“What this study adds:
Abstract:

“Objectives: To investigate whether moderate alcohol consumption has a favourable or adverse association or no association with brain structure and function.

“Participants: 550 men and women with mean age 43.0 (SD 5.4) at study baseline, none were ‘alcohol dependent’ according to the CAGE screening questionnaire, and all safe to undergo MRI of the brain at follow-up. Twenty three were excluded because of incomplete or poor quality imaging data or gross structural abnormality (such as a brain cyst) or incomplete alcohol use, sociodemographic, health, or cognitive data.

“Results: Higher alcohol consumption over the 30 year follow-up was associated with increased odds of hippocampal atrophy in a dose dependent fashion. While those consuming over 30 units a week were at the highest risk compared with abstainers (odds ratio 5.8, 95% confidence interval 1.8 to 18.6; P≤0.001), even those drinking moderately (14-21 units/week) had three times the odds of right sided hippocampal atrophy (3.4, 1.4 to 8.1; P=0.007). There was no protective effect of light drinking (1-<7 units/week) over abstinence. Higher alcohol use was also associated with differences in corpus callosum microstructure and faster decline in lexical fluency. No association was found with cross sectional cognitive performance or longitudinal changes in semantic fluency or word recall.

“Conclusions: Alcohol consumption, even at moderate levels, is associated with adverse brain outcomes including hippocampal atrophy. These results support the recent reduction in alcohol guidance in the UK and question the current limits recommended in the US…”