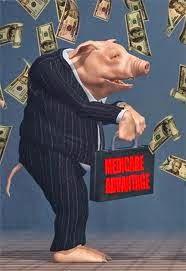 “…A year-long investigation by the Center for Public Integrity has revealed that health insurers may have fleeced taxpayers out of $70 billion in just five years. You would think members of Congress in both parties would be so outraged they’d be launching their own investigation and railing against the ‘fraud and abuse’ they decry on the campaign trail…


“…Wall Street financial analysts devote considerable attention to determining how much insurers’ Medicare Advantage business contributes to their bottom lines and how much of the money they take in from the government is actually paid out in medical claims. The less they spend on medical care, the better, from Wall Street’s perspective.

“This is a huge business, and it’s growing rapidly. This year alone, the government is expected to pay private insurers $150 billion to cover about 16 million Medicare beneficiaries. Almost one of every three Medicare enrollees now belongs to a privately operated Medicare Advantage plan. Because the business is so profitable, insurers spend millions of dollars on lobbying, advertising, PR and ‘grassroots’ political activities to keep the money flowing unimpeded.

“It’s not been a secret that the government has been overpaying the private insurers. The Congressional Budget Office has provided lawmakers with estimates of the overpayments a number of times in the past. One health policy expert testified that the extra payments to Medicare Advantage plans averaged 13 percent — or $1,100 per enrollee — in 2009 alone. In an effort to fix the problem, lawmakers included a provision in the Affordable Care Act to reduce the overpayments by several billion dollars over the next several years. That prompted the industry to launch an intensive campaign to try to forestall those reductions…”