The First Man by Albert Camus 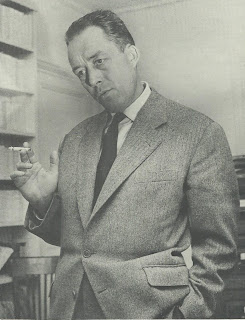 On publishing the unfinished autobiographical novel Camus was carrying with him at the time of his death, Camus’ daughter had this to say:

“We believed a manuscript of such importance would sooner or later be published unless we destroyed it. Since we had no right to destroy it, we preferred to publish it ourselves so that it would appear exactly as it was. Secondly, it seemed to us that this autobiographical account would be of exceptional value to those interested in Camus.

“Finally, it is obvious that my father would never have published this manuscript as it is, first for the simple reason that he had not completed it, but also because he was a very reserved man and would no doubt have masked his own feelings far more in its final version.

“But it seems to me—and I say this with hesitation, for I can claim no objectivity—it seems to me that one can most clearly hear my father’s voice in this text because of its rawness. That is why I hope readers will come to it in a spirit of brotherhood” (Catherine Camus, March 1995).

Camus was born and raised in poverty in Mondovi, Algeria. His mother was uneducated and deaf; his father was killed in WW I when Camus was a baby. First Man is poetically nostalgic. It is embodies many of Camus’ themes, but on a more personal level: it includes the beauty of his birth place and his allegiance to Algeria; his love and respect for one of his teachers; his antipathy for violence and capital punishment; his belief in rebellion and resistance as a means for establishing values and for rejecting political extremes, nihilism and religious ideologies; and his belief that, like Sisyphus, our fate belongs to us.

A few excerpts from the book:

“…The child [Jacques Cormery] felt a limitless despair rising in him and in silence he cried for the destitute home of his entire childhood. No, school did not just provide them an escape from family life. At least in M. [Andre Germain’s] class, it fed a hunger in them more basic even to the child than to the man, and that is the hunger for discovery. No doubt they were taught many things in their other classes, but it was somewhat the way geese are stuffed: food was presented to them and they were asked to please swallow it.

“In M. Germain’s class, they felt for the first time that they existed and that they were the objects of the highest regard: they were judged worthy to discover the world. And even their teacher did not devote himself just to what he was paid to teach them, he welcomed them with simplicity into his personal life; he lived that life with them, told them about his childhood and the lives of children he had known, shared with them his philosophy but not his opinions… [H]e would condemn with all the more vigor those evils over which there could be no argument—theft, betrayal, rudeness, dirtiness…

“[Cormery] too was… wandering through the night of the years in the land of oblivion where each one is the first man, where he had to bring himself up, without a father, having never known those moments when a father would call his son, after waiting for him to reach the age of listening, to tell him the family’s secret, or a sorrow of long ago, or the experience of his life…

“[A]nd no one had spoken to him, and he had to learn by himself, to grow alone, in fortitude, in strength, find his own morality and truth… to learn to live without roots and without faith, and today all of them are threatened with eternal anonymity and the loss of the only consecrated traces of their passage on this earth, the illegible slabs in the cemetery…

“[T]hey had to learn how to live in relation to others, to the immense host of the conquerors, now dispossessed, who had preceded them on this land and in whom they now had to recognize the brotherhood of race and destiny…

“[H]e thought of the worn and green-encrusted gravestones he had just left, acknowledging with a strange sort of pleasure that death would return him to his true homeland and, with its immense oblivion, would obliterate the memory of that alien and ordinary man who had grown up, had built in poverty, without help or deliverance, on a fortunate shore and in the light of the first mornings of the world, and then alone, without memories and without faith, he had entered the world of the men of his time and its dreadful and exalted history…”

A letter Camus had written to Monsieur Germain, the elementary school teacher alluded to in this novel, after receiving the Nobel Prize for literature:

“I let the commotion around me these days subside a bit before speaking to you from the bottom of my heart. I have just been given far too great an honor, one I neither sought nor solicited. But when I heard the news, my first thought, after my mother, was of you. Without you, without the affectionate hand you extended to the small poor child that I was, without your teaching, and your example, none of all this would have happened. I don’t make too much of this sort of honor. But at least it gives me an opportunity to tell you what you have been and still are for me, and to assure you that your efforts, your work, and the generous heart you put into it still live in one of your little schoolboys who, despite the years, has never stopped being your grateful pupil. I embrace you with all my heart” (Albert Camus, November 19, 1957).

Albert Camus died in an automobile accident on January 4, 1960.