The Plague by Albert Camus 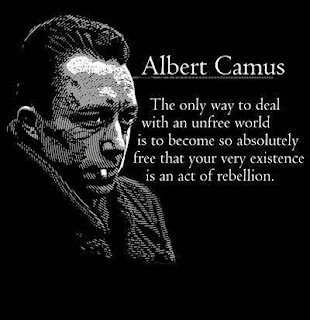 We are born into a world where we confront inexplicable absurdities, such as the plagues of suffering and death. The fact that we will die should awaken an awareness of our responsibility to ourselves and to others. Though Camus presents a hopeless struggle against the problems of incomprehensible, ambiguous evil and indifference, Camus’ characters choose to rebel against arbitrary suffering and death, however useless their protests may seem. To resist other forms of intentional plagues is to recognize and defend human dignity against human cruelties such as murder, oppression, tyranny, racism, slavery, misogyny, prevarication, hypocrisy, avarice…
-Glen Brown


Excerpts from a philosophical and symbolical novel entitled The Plague:

“...Pestilences have a way of recurring in the world... There have been as many plagues as wars in history; yet always plagues and wars take people by surprise... Stupidity has a knack of getting its way; as we should see if we were not always so much wrapped up in ourselves... How should they have given a thought to anything like the plague, which rules out any future, cancels journeys, silences the exchange of views. They fancied themselves free, and no one will ever be free so long as there are pestilences... (37).

“The first thing that plague brought to our town was exile… that sensation of a void within which never left us, that irrational longing to hark back to the past or else to speed up the march of time, and those keen shafts of memory that stung like fire… (71).

“They drifted through life rather than lived, the prey of aimless days and sterile memories, like wandering shadows that could have acquired substance only by consenting to root themselves in the solid earth of their distress… (73). But memory is less disposed to compromise… It also incited us to create our own suffering and thus to accept frustration as a natural state. This was one of the tricks the pestilence had of diverting attention and confounding the issues. Thus, each of us had to be content to live only for the day, alone under the vast indifference of the sky… (75).

‘“In the early days, when they thought this epidemic was much like other epidemics, religion held its ground. But once these people realized their instant peril, they gave their thoughts to pleasure. And all the hideous fears that stamp[ed] their faces in the daytime [were] transformed in the fiery, dusty nightfall into a sort of hectic exaltation, an unkempt freedom fevering their blood’ (121).

“…The evil that is in the world always comes of ignorance, and good intentions may do as much harm as malevolence, if they lack understanding… The most incorrigible vice being that of an ignorance that fancies it knows everything and therefore claims for itself the right to kill. The soul of the murderer is blind, and there can be no true goodness nor true love without the utmost clear-sightedness… (131).

“There's no question of heroism in all this. It's a matter of common decency... The only means of fighting a plague is--common decency... It consists in doing [your] job... (163). No longer were there individual destinies; only a collective destiny, made of plague and the emotions shared by all. Strongest of these emotions was the sense of exile and of deprivation, with all the crosscurrents of revolt and fear set up by these… (167).

“The truth is that nothing is less sensational than pestilence, and by reason of their very duration great misfortunes are monotonous. In the memories of those who live through them, the grim days of plague do not stand out like vivid flames, ravenous and inextinguishable, beaconing a troubled sky, but rather like the slow, deliberate progress of some monstrous thing crushing out all upon its path... (179).

“Without memories, without hope, they lived for the moment only. Indeed, the here and now had come to mean everything to them. For there is no denying that the plague had gradually killed off in all of us the faculty not of love only but even of friendship. Naturally enough, since love asks something of the future, and nothing was left us but a series of present moments… (182).

“Now that the noises of vehicles and motors--the sole voice of cities in ordinary times--had ceased, was but one vast rumor of low voices and incessant footfalls, the drumming of innumerable soles timed to the eerie whistling of the plague in the sultry air above, the sound of a huge concourse of people marking time, a never ending, stifling drone that, gradually swelling, filled the town from end to end, and evening after evening gave its truest... expression to the blind endurance that ousted love from all our hearts... (185).

“It comes to this: like all of us who have not yet died of plague, he fully realizes that his freedom and his life may be snatched from him at any moment. But since he, personally, has learned what it is to live in a state of constant fear, he finds it normal that others should come to know this state. Or perhaps it should be put like this: fear seems to him more bearable under these conditions than it was when he had to bear its burden alone... (199).

“We see no reason for a child’s suffering. And, truth to tell, nothing was more important on earth than a child’s suffering, the horror it inspires in us, and the reasons we must find to account for it… Our religion had no merit… We all were up against the wall that plague had built around us… Father Paneloux refused to have recourse to simple devices enabling him to scale that wall. Thus, he might easily have assured [us] that the child’s suffering would be compensated for by an eternity of bliss… But how could he give that assurance when… he knew nothing about it? For who would dare to assert that eternal happiness can compensate for a single moment’s human suffering? (223 -224).

“...The agony of a child was humiliating to the heart and to the mind. But that was why we had to come to terms with it... Paneloux assured those present [in his sermon] ... since it was God's will, we too, should will it. Thus, and thus only the Christian could face the problem squarely and, scorning subterfuge, pierce to the heart of the supreme issue, the essential choice. And his choice would be to believe everything, so as not to be forced into denying everything... (225) We must accept the dilemma and choose either to hate God or to love God. And who would dare to choose to hate Him“? (228).

“...Profiteers were taking a hand and purveying at enormous prices essential foodstuffs not available in the shops. The result was that poor families were in great straits, while the rich went short of practically nothing. Thus, whereas plague by its impartial ministrations should have promoted equality among our townsfolk, it now had the opposite effect and, thanks to the habitual conflict of cupidity, exacerbated the sense of injustice rankling in men's hearts... (236-237).

“I have realized that we all have plague… I only know that one must do what one can to cease being plague-stricken… (252). I know, too, that I’m not qualified to pass judgment on others… All I maintain is that on this earth there are pestilences and there are victims, and it’s up to us, so far as possible, not to join forces with the pestilences… (253).

“A loveless world is a dead world, and always there comes an hour when one is weary of prisons, of one’s work, and of devotion to duty, and all one craves for is a loved face, the warmth and wonder of a loving heart… (261).

“It could only be the record of what had to be done, and what assuredly would have to be done again in the never ending fight against terror and its relentless onslaughts, despite their personal afflictions, by all who, while unable to be saints but refusing to bow down to pestilences, strive their utmost to be healers… He knew... that the plague never dies or disappears for good; that it can lie dormant for years and years... that it bides its time... and that perhaps the day will come when, for the bane and the enlightening of men, it would rouse up... again...” (308).