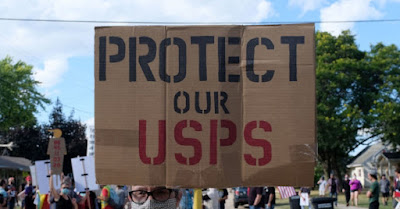 Democratic lawmakers issued fresh calls late Monday for President Joe Biden to remove all six members of the U.S. Postal Service Board of Governors to enable the ouster of Postmaster General Louis DeJoy after the board declared its "full support" for the Republican megadonor accused of openly sabotaging the agency.

"Every single member of the postal board should be fired. They're openly complicit in DeJoy's sabotage and arson."—Rep. Bill Pascrell, Jr. (D-N.J.)"Instead of holding DeJoy accountable, the USPS Board of Governors confirmed what I always suspected was true: The six current members are all DeJoy loyalists," tweeted Sen. Tammy Duckworth (D-Ill.).

Duckworth was reacting to the response she received from the postal board regarding her March 25 letter demanding it fire DeJoy for cause, citing his "pathetic 10-year plan to weaken USPS" as evidence that "he is a clear and present threat to the future of the postal service and the well-being of millions of Americans, particularly small business owners, seniors, and veterans, who depend on an effective and reliable USPS to conduct daily business, safely participate in democracy, and receive vital medication."

The letter to Duckworth signed by postal board chairman Ron Bloom described DeJoy as a "transformational leader" who "continues to enjoy the board's full support."

The new 10-year strategy, the letter asserts, will "achieve service excellence adapting the postal service to the evolving needs of the American people, which will make our product offerings more attractive to prospective customers."

Rep. Bill Pascrell, Jr. (D-N.J.)—who called on Biden in January to purge the postal board for having remained silent during "the devastating arson of the Trump regime"—criticized the board's response to Duckworth.

"Every single member of the postal board should be fired," Pascrell tweeted Monday. "They're openly complicit in DeJoy's sabotage and arson. Fire every board member then fire DeJoy."

Duckworth, in a separate tweet Monday, said, "I'm re-upping my February request that @POTUS use his legal authority to remove the entire Board for cause."

The lawmakers' calls were echoed by Citizens for Responsibility and Ethics in Washington.

Last month, over 50 U.S. House members, including Pascrell, similarly urged Biden to replace the postal board, the only body with the power to directly fire the postmaster general. The lawmakers said in the letter that the current six members of the board should be replaced "with nominees of the caliber of your recent nominees for the three vacant board seats." The letter (pdf) added:

Under the tenure of this BOG, the postal service was blatantly misused by President Trump in an unsuccessful gambit to influence a presidential election, the Postal Service is currently failing to meet its own service standards with historically low rates of on-time delivery, and conflicts of interest appear to be a requirement for service.  Because of their lax oversight, many families struggling through the pandemic still await delivery of their stimulus checks, credit card statements, or event holiday cards. The nonpartisan Postal Service Office of Inspector General found that the BOG allowed their hand-picked postmaster general (PMG) to implement significant operational changes in the milieu of the election and the pandemic without conducting any research into the impacts and ramifications of these changes.

"The board has remained silent in the face of catastrophic and unacceptable failures at a moment when the American people are relying on the postal service the most," the lawmakers wrote. "It is time to remove all governors and start over with a board vested with the expertise and acumen this nation needs in its postal service leadership."

Email ThisBlogThis!Share to TwitterShare to FacebookShare to Pinterest
Labels: USPS