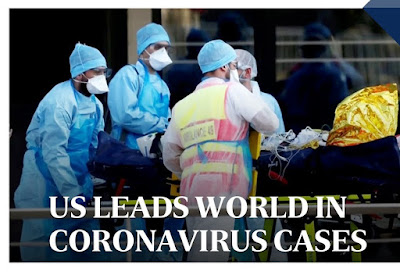 “When the definitive history of the coronavirus pandemic is written, the date 20 January 2020 is certain to feature prominently. It was on that day that a 35-year-old man in Washington state, recently returned from visiting family in Wuhan in China, became the first person in the US to be
diagnosed with the virus.

“On the very same day, 5,000 miles away in Asia, the first confirmed case of Covid-19 was reported in South Korea. The confluence was striking, but there the similarities ended.

“In the two months since that fateful day, the responses to coronavirus displayed by the US and South Korea have been polar opposites.

“One country acted swiftly and aggressively to detect and isolate the virus, and by doing so has largely contained the crisis. The other country dithered and procrastinated, became mired in chaos and confusion, was distracted by the individual whims of its leader, and is now confronted by a health emergency of daunting proportions.

“Within a week of its first confirmed case, South Korea’s disease control agency had summoned 20 private companies to the medical equivalent of a war-planning summit and told them to develop a test for the virus at lightning speed. A week after that, the first diagnostic test was approved and went into battle, identifying infected individuals who could then be quarantined to halt the advance of the disease.

“Some 357,896 tests later, the country has more or less won the coronavirus war. On Friday only 91 new cases were reported in a country of more than 50 million.

“The US response tells a different story. Two days after the first diagnosis in Washington state, Donald Trump went on air on CNBC and bragged: 'We have it totally under control. It’s one person coming from China. It’s going to be just fine.'

“A week after that, the Wall Street Journal published an opinion article by two former top health policy officials within the Trump administration under the headline Act Now to Prevent an American Epidemic. Luciana Borio and Scott Gottlieb laid out a menu of what had to be done instantly to avert a massive health disaster.

“Top of their to-do list: work with private industry to develop an ‘easy-to-use, rapid diagnostic test’ – in other words, just what South Korea was doing.

“It was not until 29 February, more than a month after the Journal article and almost six weeks after the first case of coronavirus was confirmed in the country that the Trump administration put that advice into practice. Laboratories and hospitals would finally be allowed to conduct their own Covid-19 tests to speed up the process.

“Those missing four to six weeks are likely to go down in the definitive history as a cautionary tale of the potentially devastating consequences of failed political leadership. Today, [139,459] cases have been confirmed across the US, pushing the nation to the top of the world’s coronavirus league table – above even China.

“More than a quarter of those cases are in New York City, now a global center of the coronavirus pandemic, with New Orleans also raising alarm. Nationally, [2,425] people have died. [Globally, 33,900+ people have died, thus far. There have been 721,500+ cases].

“Most worryingly, the curve of cases continues to rise precipitously, with no sign of the plateau that has spared South Korea. ‘The US response will be studied for generations as a textbook example of a disastrous, failed effort,’ Ron Klain, who spearheaded the fight against Ebola in 2014, told a Georgetown university panel recently. ‘What’s happened in Washington has been a fiasco of incredible proportions.’…” (The Guardian, March 28).