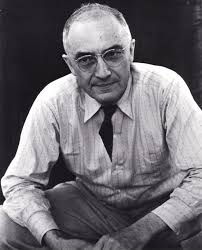 By the road to the contagious hospital
under the surge of the blue
mottled clouds driven from the
northeast-a cold wind.  Beyond, the
waste of broad, muddy fields
brown with dried weeds, standing and fallen

patches of standing water
the scattering of tall trees

All along the road the reddish
purplish, forked, upstanding, twiggy
stuff of bushes and small trees
with dead, brown leaves under them
leafless vines-

They enter the new world naked,
cold, uncertain of all
save that they enter.  All about them
the cold, familiar wind-

Now the grass, tomorrow
the stiff curl of wild carrot leaf
One by one objects are defined-
It quickens:  clarity, outline of leaf

But now the stark dignity of
entrance-Still, the profound change
has come upon them:  rooted, they
grip down and begin to awaken

Her body is not so white as
anemony petals nor so smooth—nor
so remote a thing. It is a field
of the wild carrot taking
the field by force; the grass
does not raise above it.
Here is no question of whiteness,
white as can be, with a purple mole
at the center of each flower.
Each flower is a hand’s span
of her whiteness. Wherever
his hand has lain there is
a tiny purple blemish. Each part
is a blossom under his touch
to which the fibres of her being
stem one by one, each to its end,
until the whole field is a
white desire, empty, a single stem,
a cluster, flower by flower,
a pious wish to whiteness gone over—
or nothing.

His poems have been published in such periodicals as Poetry, The Dial, Origin, Blast, Pagany, Little Review, New Masses, Partisan Review, and Glebe. Contributing editor of literary magazines and journals, including Contact I, 1920-23, and Contact II, 1932 (Poetry Foundation).