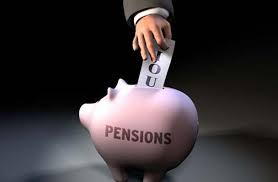 "Required contributions continued to climb in 2015, but plans also stepped up their payments from 86 percent to 91 percent of the required amount." [Payments to the five largest state-administered public pension systems in Illinois have never come near the required amount; thus, approximately ¾ of each payment to the five Illinois pension systems is for the debt service incurred as a result of politicians not paying fully into those systems].

"The funding outlook suggests steady improvement if plans realize expected returns, but a downward drift if returns fall short, as many financial experts predict." [Of course, three States that will not expect full funding from politicians and have the worst shortfalls are Illinois at 39% funded, Kentucky at 44% funded, and Connecticut at 48% funded].

".…The year 2015 produced little change in the funded status of state and local pension plans. Based on actu­arial valuations, funding rose from 73 percent in 2014 to 74 percent in 2015. Under the new GASB rules, where assets are valued at market, funding declined slightly, reflecting the poor stock market performance in 2015.

"2015 was the second year that the new rules were in effect for financial reporting. Under these provi­sions, funded ratios were based on market asset values and 10 plans – those with assets projected to be insuf­ficient to cover future benefits – adopted a blended rate to calculate liabilities.

"As a result of these two provisions, the overall ratio of assets to liabilities was lower under the new rules than under the traditional rules. What happens from here on out depends very much on investment performance [and fully funding the systems]. In 2020, assum­ing expected returns are realized, plans should be 78 percent funded. If returns are lower, as predicted by many investment firms, funding will drift lower."

To read the complete article from the Center for Retirement Research at Boston College, “The Funding of State and Local Pensions: 2015-2020” by Alicia H. Munnell and Jean Pierre Aubry, click here.