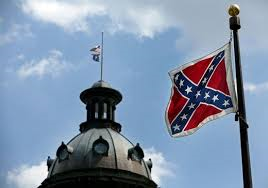 “...The flag has no meaning ‘regardless’ of politics, or above politics; its heritage is not exempt from history. Anyone can interpret anything any way they want, but if they claim historical sanction for their interpretation, then they'd best be accurate. And in that sense, history is clear: There is no revolutionary cause associated with the flag, other than the right for Southern states to determine how best to subjugate black people and to perpetuate slavery.

“First sewn in 1861 — there were about 120 created for the war — the flag was flown by the cavalry of P.G.T. Beauregard, the Confederacy's first duly appointed general, after he took Manassas, Virginia, in the first Battle of Bull Run.

“After the Civil War, the flag saw limited (and quite appropriate) use at first: It commemorated the sons of the South who died during the war. We can easily forgive the families of those who died for grieving. No account of the Civil War can be complete without noting how vicious the Union army could be, and how destructive its strategy toward the end of the war had become. That the cause of the war, once the damned Union army actually invaded the South and started destroying it, came to be associated with an actual, guns-out defense of real property and liberties — mainly, the liberty not to die during a war — is not controversial. That's what happens during wars.

“But never did the flag represent some amorphous concept of Southern heritage, or Southern pride, or a legacy that somehow includes everything good anyone ever did south of the Mason-Dixon Line, slavery excluded. Fast-forward about 100 years, past thousands of lynchings in the South, past Jim Crow and Plessy v. Ferguson, past the state-sanctioned economic and political subjugation of black people, and beyond the New Deal that all too often gave privileges to the white working class to the specific exclusion of black people.

“In 1948, Strom Thurmond's States' Rights Party adopted the Battle Flag of Northern Virginia as a symbol of defiance against the federal government. What precisely required such defiance? The president's powers to enforce civil rights laws in the South, as represented by the Democratic Party's somewhat progressive platform on civil rights. Georgia adopted its version of the flag design in 1956 to protest the Supreme Court's ruling against segregated schools, in Brown v. Board of Education.

“The flag first flew over the state capitol in South Carolina in 1962, a year after George Wallace raised it over the grounds of the legislature in Alabama, quite specifically to link more aggressive efforts to integrate the South with the trigger of secession 100 years before — namely, the storming of occupied Fort Sumter by federal troops. Fort Sumter, you might recall, is located at the mouth of Charleston Harbor.

“Opposition to civil rights legislation, to integration, to miscegenation, to social equality for black people — these are the major plot points that make up the flag's recent history. Not Vietnam. Not opposition to Northern culture or values. Not tourism. Not Obama Care. Not anything else.

“There's only one uncontrived association that's a step removed from racial subjugation, and it's the initial post-war use of the flag: to celebrate the victories of the Confederate army and to mourn those who died while fighting in the Civil War. But today, 150 years later, such flags are best and most appropriate displayed in museums and at cemeteries.

“It should not be controversial to say that people should not spend their days mourning relatives they never knew from a war that ended 150 years ago, especially if that feeling is so paramount that it outweighs the sense of brotherhood they might feel toward fellow humans who are alive, and for whom the flag's presence and endorsement by the government is the personification of the evil of white supremacy.”

From the article, The surprisingly uncomplicated racist history of the Confederate flag by Marc Ambinder