Hotline for Rauner to Expose Political Crimes? Are You Kidding? By John Dillon 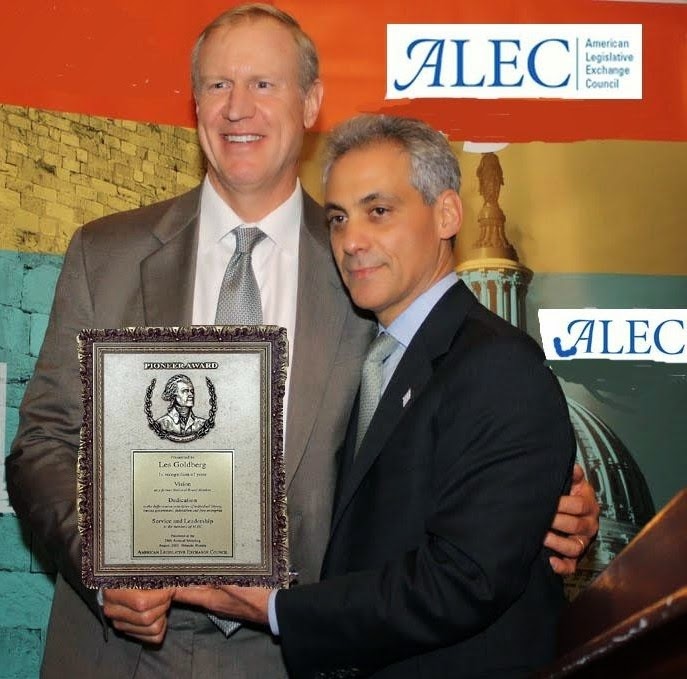 “…Rauner Says If You’ve Seen Something Illegal, Call Me!

“…If you spot your current Governor up to no good, you can call Rauner’s new HOTLINE:  855-PAT-TIPS.  If you prefer using the promised veil of technology, you can also email Bruce with your concerns at stopcorruption@brucerauner.com.

“In actuality, Rauner is trying to ride the crest of the latest wave of investigations into fund mismanagement of Quinn’s anti-violence programs in Chicago, a carelessly run democratic operation possibly misappropriating untold amounts of money on ineffectual programs to provide cultural opportunities for children in high crime areas.

“…Here’s a modest (and much better) proposal for a possible crime by current politician(s).  How about a Governor who ignored his oath of office, his refusal to uphold Article XIII, Section 5 of the Illinois Constitution to keep a legal promise and not diminish or impair the contractual guarantee for workers once they began employment with the State?

“I called the HOTLINE tonight, and I even emailed my concerns as well.  I certainly hope you will do the same… In fact, I know many, many legislators who ignored their oaths and acted in a less than legal manner - in my opinion.  Nekritz?  Biss?  M. Davis?  Lou Lang?  Emil Jones?  [Michael Connelly?] Ecetera.

“Hello, Bruce Rauner.  My name is John Dillon, and I am reporting corruption in Illinois politics at the highest levels.  Governor Pat Quinn, along with members of the Senate and House, passed an unconstitutional bill called SB1 which ignores the earned rights of public workers, threatens the promised futures of current workers as well as current retirees, and avoids the contractual guarantees provided by the Illinois Constitution.  I really hope you will do something about this, Bruce, but I notice that you are not saying anything about it on your website.  I hope you’ll explain your position clearly, Bruce, and explain how you are a better choice for the many hundred thousands of us in the public sector service area.  Thanks, Bruce…”

from Hotline for Rauner to Expose Political Crimes? Are You Kidding? By John Dillon
"The number 855-pat tips does work.  The other is not working" (Dillon).


“Of course, Rauner is using it to try and embarrass the Governor. But why be so limited? What has been the biggest example of corruption and the theft of public money in Illinois history?


“Rauner wants to turn our defined-benefit pensions into a Wall Street ponzi scheme, and Rahm wants to rob city employees of their pensions to fund his private development give-aways.


“Don’t just sit there. Everyone who reads this should call the tip-line and report this corruption: 1 800 728 8477. ‘Tip: Rauner, Rahm and Quinn are stealing our pensions.’


“Flood the tip-line with calls.
“Thanks Bruce. Great idea!”

From Report Rahm, Rauner and Quinn to the Illinois theft and corruption hot-line