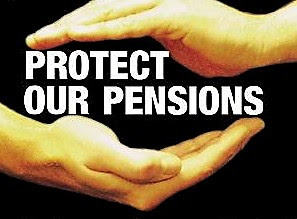 The confrontation between rights and power has a long history.  John Stuart Mill, in his famous essay On Liberty, examined the “struggle between Liberty and Authority… between subjects… and the Government.” A question he might have asked today if he were alive is what should be the limits of power that legislators have over their constituents when some of their decisions border on political despotism?

No doubt, public employees and retirees have been blamed for the mismanagement of the states’ budgets all across the country.  It is easy to construct victims with a dubious call for “Shared Sacrifice.” Of course, by “Shared Sacrifice,” legislators and executives of corporations mean only middle-class Americans, and especially public employees and retirees.  Rose Ann DeMoro, the leader of National Nurses United, says the wealthy have “created an economy on to themselves without people.”

To blame public employees for the state’s budget deficits is reprehensible. To change public employees’ and retirees' constitutionally-guaranteed pensions with the passage of any law that mitigates benefits (that were earned) and deprives basic rights is an encroachment of the public employees' right to human dignity and justice.  It is a calculated infringement of those essential principles, made evident by the lack of reciprocity and obligation of legislators and their lawyers and businesspersons who will not be made to sacrifice anything.

With the enactment of a pension reform bill, legitimate rights and moral concerns are in jeopardy not only for public employees and retirees, but for every citizen in the State of Illinois. Defrauding a person out of his or her constitutionally-guaranteed rights and benefits violates a most significant interest in morality and ethics and in basic legal principles of both the State and U.S. Constitutions that protect every citizen. Attempting to find ways to break those promises by the Civic Committee of the Commercial Club of Chicago’s Sidley Austin LLP is a costly, dangerous effrontery and precedent to set in motion.

In a proposed world of freedom, justice, and peace, the General Assembly of the United Nations adopted and proclaimed The Universal Declaration of Human Rights in December 1948. Article 23 of the document states that “Everyone who works has the right to just and favorable [compensation] ensuring for himself and his family an existence worthy of human dignity…”

What public employees and retirees must do now is defend their rights and ensure the aforementioned proclamation. We can never become complacent in our belief that justice exists because policymakers can be trusted to make ethical and legal decisions for the rest of us; moreover, we can never become indifferent to political power and what exorbitant wealth can buy.  As Bill Moyers said, a “democracy is on the auction block, [when it is] subject to the highest bidder.” Citizens United and “We Mean Business” epitomize what money can buy, and what it can destroy.

Although we can infer that policymakers will often pass laws for their own advantage, most of us still adhere to the belief that the legislators’ duty to act justly stems from their duty to keep promises. (We should recall that despite their pledges, the legislators’ criteria for justice are their consideration for what is most expedient for them—their re-election, which is often concealed by a hypocritical concern for the general welfare of the state’s financial condition).

Undoubtedly, state employees’ pensions are not generally viewed as in the best interest of the well-being of a legislator’s constituency.  Many people believe that public pensions serve no purpose, except solely for public employees' and retirees' enviable, financial promises.  So how should we argue then for the expediency of such a right?  Mortimer Adler once stated: “Is being unjust to a minority of citizens beneficial as a means for the majority’s attainment of happiness?”  Moreover, Thomas Jefferson asked a long time ago: “Should not the minorities [of individuals] possess their equal rights, which equal law must protect?”

Though all of us claim certain beliefs as truths, we must remember that we cannot abdicate our right to representation in a decision-making process that attacks only us. It is up to us to secure our future by opposing the unfairness of any pension reform. It is our challenge to defend our dignity with stubborn resolve.  It is our primary task to enlist every citizen in a unification of will to protect our rights, as they are benefits earned for our life-long labor.  This undertaking forestalls our pro-active and continual engagement with the Illinois General Assembly and our re-education of the misinformed public.

Indeed, fortitude and knowledge are our power, and this resilience and “knowledge must [become our] action” (Sophocles).  Our collective financial fate must not be determined by prejudicial legislation.  Both public employees and retirees are intrinsically bound to one another in this regard.  As Martin Luther King eloquently stated, “We are caught in an inescapable network of mutuality, tied in a single garment of destiny.”

Let us follow King’s message of “direct action” and unify our efforts to confront the struggle we have with the powerful interests of the privileged elite in Illinois; let us “arouse the conscience of not only our colleagues but of our communities” and expose the unfairness and hypocrisy of pension reform that will rob us of our constitutional rights and benefits.

Let us make our goal the preservation of justice and self-worth for all workers. “We Are [truly] One” when we unite and fight against unfairness and inequality in the State of Illinois, when we rally together to un-elect policymakers who support unconstitutional pension reform, and when we reach out to those in our communities who are overwhelmed and offer them hope for a better future.  To do these things is to act upon principles that we believe are so valuable that to do nothing would be a greater injustice.