In Sweden, only responsible people can have guns 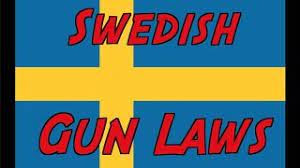 “…Here’s how the Swedish system works: Only responsible people are trusted with firearms. Sweden licenses guns in much the same way we license cars and drivers. You can have up to six guns but can get more with special permission.
“To apply for a firearm permit you must first take a year-long hunter training program and pass a written and shooting test. You can also apply for a gun permit if you’ve been a member of an established shooting club for six months.
“In addition to undergoing training, Sweden’s gun owners must store their firearms safely. Guns must be locked away in a vault, not stored beneath your car seat or in the nightstand where your kids can find them.
“Responsibility in Sweden goes further yet: Convicted of a felony? No guns for you. Beat your wife? No guns. Under a restraining order? No guns. Drive drunk? No guns.
“(The gun law does not spell out specific actions that cause a citizen to be ‘unfit’ to have a gun permit. It does say that the police must have a ‘reasonable cause’ to suspend a permit, and these kinds of things might signal that a gun owner is ‘unfit’).
“Even so, being responsible is not such a tough job. Sweden denies permits to only about 1,000 people a year (out of 600,000 permit holders), and they can appeal their rejection to the courts.
“And despite these restrictions, Sweden has a strong hunting culture. The heavily forested country is about the size of California but with one-fourth the people. Its moose population per acre is the world’s largest, and moose hunting is front-page news. The king himself hunts moose, and small towns shut down for the season opener much like Wisconsin towns do for the state's deer season.
“Sweden has nearly 300,000 hunters, which means it has a readily armed population should it need defense. And make no mistake: Guns are part of Sweden’s culture, history, and national defense — even though it has enjoyed more than 200 years of peace.
“Many of my Swedish colleagues served in the military and are proficient with firearms. They can practice at shooting ranges all over Stockholm. When hiking in a city park, it’s common to hear the measured shots of target practice nearby.
“And yet gun violence is low in Sweden. The country ranks 10th out of 178 countries in the world for per capita gun ownership but in 2014 had only 21 homicides by firearms. In contrast, the US is first in per capita ownership and had more than 8,000 (gun) homicides in 2014. Controlling for population, US firearms homicides are 700 percent higher than Sweden’s…” (Tom Heberlein, Vox, Aug. 2016).

It is said that laws and their restrictions will never apply to deranged criminals. Moreover, the fact that there are an estimated 300 million firearms already in circulation in America make it impossible for most gun control laws to have any effect on reducing violent crimes. Because most gun control laws also prohibit people’s self-reliance and self-defense, they can also cost the lives of more innocent victims. Most unfortunately, America is a violent country throughout its history and seems beyond hope.

Let’s pursue a policy goal that eliminates so-called “corporate personhood” (Citizens United): this corrupt, unlimited campaign spending from moneymaking, mendacious powers like the NRA and the Koch Brothers, et. al. that coerces legislators and the media to ingratiate them.