“Good luck to Biden in dealing with President Putin—don’t fall asleep during the meeting, and please give him my warmest regards!” -trump 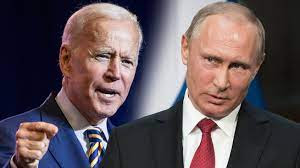 Ahead of Biden’s first meeting with Putin, Trump's playing his greatest hits. Former President Donald Trump is apparently missing his old job right now, as he watches his successor hanging out with a bunch of world leaders including Russian President Vladimir Putin.

Ahead of President Joe Biden’s first meeting as president with Putin in Geneva later this week, Trump fired off a statement fondly recalling that time in 2018 when he met with Putin in Helsinki and rejected U.S. intelligence’s assessment that Russia intervened in the 2016 presidential election on behalf of Trump, in favor of Putin’s denial that his government interfered.

“My people came to me—Dan Coats came to me and some others—they said they think it’s Russia. I have President Putin; he just said it’s not Russia. I will say this: I don’t see any reason why it would be,” Trump said in a joint press conference with Putin during the summit three years ago, before going off on a conspiratorial tangent about 2016 Democratic nominee Hillary Clinton’s emails and the Democratic National Committee. “So I have great confidence in my intelligence people, but I will tell you that President Putin was extremely strong and powerful in his denial today,” Trump added.

Trump’s performance in Helsinki was roundly denounced by the U.S. foreign policy establishment, including officials in his own party. The late Arizona Sen. John McCain, a Russia hawk who frequently clashed with Trump, called it “one of the most disgraceful performances by an American president in memory.” Trump, on the other hand, still believes the meeting was “great and productive,” he said Thursday.

Trump then reiterated that to this day, he still believes Putin’s denial over the word of a slew of American law enforcement and intelligence officials. “As to who do I trust, they asked, Russia or our “Intelligence” from the Obama era, meaning people like [former FBI director James] Comey, [former FBI deputy director Andrew] McCabe, the two lovers [a reference to former FBI officials Lisa Page and Peter Strzok], [former CIA director John] Brennan, [former director of national intelligence James] Clapper, and numerous other sleeze bags (sic), or Russia, the answer, after all that has been found out and written, should be obvious,” Trump said. “Our government has rarely had such lowlifes as these working for it.”

Trump then predictably took a final shot at his former presidential rival, playing off the “Sleepy Joe” label he gave Biden during the campaign. “Good luck to Biden in dealing with President Putin—don’t fall asleep during the meeting, and please give him my warmest regards!” Trump said.

Next week’s meeting in Geneva will not be the first time Biden has encountered Putin. The two met multiple times while Biden was vice president, including at the Kremlin in 2011, when—as Biden told the New Yorker in 2014—he told Putin that he didn’t think the longtime Russian leader had a soul.

“I had an interpreter, and when he was showing me his office I said, ‘It’s amazing what capitalism will do, won’t it? A magnificent office!’ And he laughed,” Biden recalled in 2014. “As I turned, I was this close to him. I said, ‘Mr. Prime Minister, I’m looking into your eyes, and I don’t think you have a soul’” […].

Trump Is Very Jealous Biden Is Meeting with Putin (Vice)