On the Anniversary of My Daughter's Death by Jean-Marie Kauth 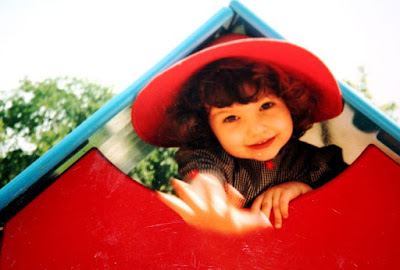 This is what happened on the anniversary of Katherine’s death this year: I was sitting in a remote cabin overlooking the Wisconsin River, one of our favorite places on earth, when I thought I smelled through the open window the horribly familiar smell of pesticides. Impossible! I thought. No one would spray out here – it must be fetid mud from the lagoon by the river. Five minutes later, my son walked in and asked if I knew there was a “TrueGreen” (Chemlawn) truck in the neighbor’s driveway. We rushed to close all the windows, open to what we had thought was the pure, pure breeze. Despite being now chemically sensitive, I went out to confront the young man spraying the toxic chemicals.
“I can smell the pesticides all the way inside,” I said, though the cabin is a good 100 feet from the neighbors, on its own 10-acre plot.
“It’s the neighbor’s, not you.” (Moot point, if I can smell it.) “I can give you a number to call….”
“What about you? Do you know that these chemicals increase not only your own risk for cancer, but for any children you might have? Please don’t do it anymore.”
Though perhaps I should have given him more information to look up himself, I took refuge inside. One son reminded me we had laundry on the line, which at least we could rewash, and the other son had to be asked please not to sleep on the porch, which was most contaminated. If you can smell pesticides, there are, without doubt, molecules in the air. I dealt with PTSD from Katherine’s exposures and death all night.
Incidents like this have happened more often than I could count, driving down the highway, staying in hotels, or in my own home. It is impossible to completely avoid such exposures. Why do people, for negligible reasons, spray pesticides for weeds or mosquitoes?
Even people I respect in public health have a blind spot about spraying for mosquitoes, and indeed, in cases of multiples deaths from West Nile, or God forbid, malaria, as climate change creeps up on us, it may be worth the trade-off to adulticide. But first should come larviding, and education about emptying breeding grounds for mosquitoes. And if spraying occurs, everyone should be thoroughly notified and behaviors altered; they must close windows, not go outside, and not touch items that were outside for several days afterwards at least.

But mostly, these chemicals are sprayed without thinking things through: if we understand that these same organophosphates drifting off farm fields cause higher levels of cancer, autism, and lower IQs in children of immigrant farm workers, why do we think suburban children, sleeping under a haze of these chemicals sprayed straight in their windows at night, are not equally vulnerable? Research shows that they are. According to some studies, ALL rates are about as high among rich white kids in the suburbs as kids of other ethnicities. Hispanic children in California are a different story (cf. Brenda Eskenazi’s work). We count deaths from West Nile; we do not account for those cancer deaths caused by pesticide exposure.

Don’t get me started on people who spray chlorophenoxy herbicides like 2,4-D and other pesticides for lawns. There are absolutely no tangible benefits, while they, their children, and their dogs all incur higher rates of various cancers, Parkinson’s Disease, and other maladies. Whole provinces in Canada have banned cosmetic pesticides for these reasons, so most Canadians are safe from casual exposures like this.
All this is to say – you cannot imagine the price you could pay for negligent decisions about seemingly trivial matters in a society that does not regulate chemicals that are designed to kill all life. Rachel Carson made this case more than 50 years ago, and surprisingly little has changed. We are killing our children to avoid minor nuisances. Shockingly, we are killing other people’s children as well. What may be legal can be very far from moral or ethical. Particularly because of the lack of commonsense regulation, we each have a responsibility to make sure not to do more harm than good – to our loved ones – and to others.’

More articles by Jean-Marie Kauth can be found here.