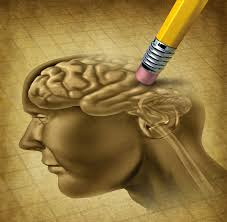 “...Memory loss is a common symptom, but different types of memory loss can mean different things. Memory loss is closely associated with dementia, so it’s the symptom that most people think about when considering the diseases that cause dementia—Alzheimer’s, for example. However, physicians now know that memory loss doesn’t always occur in precisely the same way.

“‘With an Alzheimer’s type dementia, some of the earliest indicators are short-term memory loss—that’s what’s responsible for asking the same question over and over within a few minutes, or even a few hours,’ Clinical Psychologist Dr. Roselyn G. Smith says. ‘The long-term memory can still be very sharp and intact into the more moderate to more advanced stages [of Alzheimer’s].’

“‘When we give cues to stimulate the short-term memory to someone who’s in the first stages of vascular dementia, the memory cues will prompt the person to recall what they’ve been asked to remember,’ Smith says. Vascular dementia is the second-most common form of dementia after Alzheimer’s.

“‘When we do that with someone who’s in the early stages of Alzheimer’s-type dementia, the memory cues will not [work]. The difference is that with vascular-type dementia, memories are still encoded in the memory center of the brain, the hippocampus,’ says Smith. ‘With Alzheimer’s type dementia, the hippocampus itself is where the plaques develop and the neural fibers begin to tangle, so they’re not able to encode new information. If it’s not encoded, no cue is going to help, because it’s simply not there.’

“Smith notes that other factors can prevent the memory from working properly. For instance, people with sleep disorders often have trouble with memory loss, per a 2008 study from researchers at UCLA. Researchers believe that we use sleep to organize our memories, so people with sleep disorders may have trouble recalling certain events. To an untrained person, that type of memory loss might seem like a sign of dementia, which is why physicians perform a much more detailed analysis of all of a patient’s symptoms. ‘Memory problems deserve [clinical] attention,’ Smith says, ‘but they’re not always indicative of dementia.’

“Mood changes can be drastic—and in some cases, frightening. Sudden mood changes can also indicate dementias, but again, they occur differently from patient to patient. Frequently, aspects of a patient’s personality will become amplified; a person who’s normally very sweet will become excessively sweet, or a bossy person will become downright authoritarian. In other cases, people with dementia will recognize that they’re having trouble concentrating or remembering, so they’ll become quiet, depressed, and withdrawn. Mood changes are often one of the first signs of dementia, because they’re the first thing that family members notice. A 2015 study published in the journal Neurology showed that mood changes occurred in Alzheimer’s patients long before other symptoms—including memory loss—manifested. ‘In the earlier stages of Alzheimer’s, there can be a kind of paranoia that develops, and eventually some agitation that goes with it,’ Smith says.

“With vascular dementia, apathy and depression are common, and patients may experience rapid mood changes that fluctuate between extremes. They may show too much emotion at relatively trivial events, which can be frightening for family members. Alzheimer’s patients often believe that people are stealing or hiding things from them, and they may become insensitive to the needs of their loved ones. While these types of mood changes are distressing, they’re often somewhat manageable through diet, exercise, and medication.

“Some patients show an inability to follow directions. As the brain degenerates or neural pathways become damaged, patients may have trouble concentrating on certain types of tasks. They may become confused easily and have trouble getting from one place to another without constant guidance. Again, patients often ignore these symptoms at first.

“‘I had a case one time where a very successful individual in his early ’70s was unable to complete an intake form,’ Smith says. The form consisted of a series of true-or-false questions, presented in vertical columns. The patient was completely unable to complete the form correctly, and he showed issues with problem solving. ‘Each individual item was numbered, and he couldn’t even track with that,’ Smith says. ‘He started answering randomly across the horizontal rows of items.’ The patient had also had trouble locating Smith’s office for his first appointment. That prompted Smith to recommend a full neurological workup, which led to a diagnosis.

“In other cases, the symptoms become noticeable when a patient becomes confused easily while attempting to complete household tasks. ‘Many patients [experience] agnosia, which is a failure to identify objects, despite the visual sensory functions being in place,’ Smith says. In other words, they can see perfectly, but they have trouble interpreting. Patients may also have trouble identifying family members, although Smith notes that this is a fundamentally different type of symptom. ‘Recognition of the face occurs in a very specific hub area of the greater visual cortex,’ Smith explains. ‘It’s located very precisely in the brain.’

“Language disturbances can also occur. A patient might have trouble producing language or comprehending others. This is called aphasia, and it’s especially common in stroke victims and Alzheimer’s patients. As Smith tells us, language is controlled by specific parts of the brain, and the exact nature of a patient’s language disturbances can help physicians determine the type of dementia. In Alzheimer’s patients, for example, aphasia often occurs without any change in the patient’s intellect—they’re just as intelligent and aware as ever, but they have trouble recalling words or listening to their loved ones.

“‘There may eventually come a time when the person can hardly communicate at all using language,’ the Alzheimer’s Society writes on its website. ‘This can be distressing for them and those supporting them, but there are ways to maintain communication and support the person to express themselves.’

“Medical tests can show certain types of dementia. As we mentioned earlier, many dementia symptoms can be attributed to other health issues. When physicians attempt to diagnose their patients, they’ll look at all available symptoms to make a determination. They might also perform imaging studies to look for brain damage, and in some cases, they can perform cerebrospinal fluid tests to locate certain proteins associated with conditions like Alzheimer’s. With some dementias—for instance, Creutzfeldt–Jakob disease, also known as mad cow disease—doctors may ask for blood tests.

“With that said, Smith notes that dozens of different diseases and conditions can cause dementia or dementia-like symptoms. As such, doctors need to perform a variety of tests to diagnose their patients, which is one of the reasons that early detection is so important. Unfortunately, many patients avoid their physicians because they’re afraid of a diagnosis. That’s a mistake, since things like blood clots, tumors, substance abuse issues, and thyroid issues can also cause the symptoms.

“Even when a patient has a degenerative dementia, treatment is critically important. Dementia is not an unavoidable part of aging, contrary to popular belief. ‘Treatment can really make a difference, once there’s a diagnosis,’ Smith says, ‘but you can’t get that from a list on the internet’” (Five Early Signs of Dementia and Why Everyone Should Know Them).