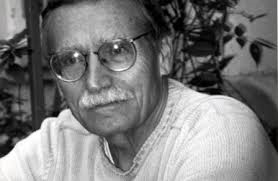 When I was young, I longed for scars
like my father’s.  They were the best
scars on the block, startling, varied,
pink as a tongue against his whiskey skin.

The longest bolted from his elbow,
finger-thick where the barbed wire plunged in,
a satin rip thinning toward the wrist.
I read the riddle of my father’s body

My silent father said little—too little, it seems—
but after the divorce he told me, tracing
the curved path on his skull where hair never grew,
“It’s the ones you can’t see that kill you,”

and it’s true our doctor said his liver,
which did him in, was scarred like an old war horse.
Still, the wound I knew best I gave him myself, hitting
a pop fly straight up and swinging the child’s bat again

with all my might as the ball descended
over the plate.  He had run in to catch it
and the bat cracked him under his chin, dropping
my father like a murdered king, peeling a wound

no butterfly bandage could cover.  I was too stunned
to move, but the look my mother gave me proved,
no matter what happened later, this man bleeding
like Laius on the ground was the one she loved.

Everything we do is for our first loves
whom we have lost irrevocably
who have married insurance salesmen
and moved to Topeka
and never think of us at all.

We fly planes & design buildings
and write poems
that all say Sally I love you
I'll never love anyone else
Why didn't you know I was going to be a poet?

The walks to school, the kisses in the snow
gather as we dream backwards, sweetness with age:
our legs are young again, our voices
strong and happy, we're not afraid.
We don't know enough to be afraid.

And now
we hold (hidden, hopeless) the hope
that some day
she may fly in our plane
enter our building        read our poem

And that night, deep in her dream,
Sally, far in darkness, in Topeka,
with the salesman lying beside her,
will cry out
our unfamiliar name.

He is also the author of fiction, non-fiction and children’s books. In 2009, Meinke was appointed the inaugural poet laureate of St. Petersburg, Florida. His additional honors include two fellowships from the National Endowment for the Arts as well as an O. Henry Award and several prizes from the Poetry Society of America.