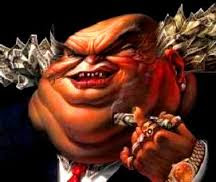 Fred Klonsky has "written before about the Illinois tax scam where the largest corporations in the state are legally able to keep the money they withhold from their workers’ paychecks as state income tax. When [Fred told] people about this program most folks [didn’t] believe [him]. It goes by the name EDGE.

"This corporate giveaway of state money started under George Ryan, continued under Rod Blagojevich (both convicted felons!), continued with pleasure by Pat Quinn, and was renewed by Bruce Rauner. A bipartisan theft of our tax money by those corporations and politicians: this was all about job creation, said Ryan/Blago/Quinn/Rauner.

"And how many jobs did this tax theft create? They created less than zero jobs, the Chicago Tribune reported. Many of those mega-corporations took the tax break right out of their employees pay and then fired them…"

For the complete article by Fred Klonsky, click here.