Should We Blame the Teachers' and Other Public Employees' Pensions for the State's Budget Disaster? 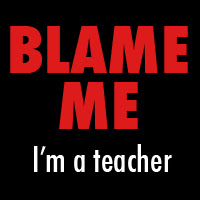 What is the purpose for publishing a list of Teacher Retirement System’s recipients who receive over $100,000 a year (a small fraction of the total retirees) when, in fact, the average TRS recipient receives a pension of approximately $43,000 a year? Is it an attempt to deceive the public through a faulty cause-and-effect understanding of the State’s budget deficit? “Despite oft-repeated claims to the contrary, the primary cause of the state’s pension funding woes have very little, if anything, to do with the [minority of] overgenerous benefits, high employee head counts or inflated costs,” (The Center for Tax and Budget Accountability).

Is it wrong to enrage part of the public and to deceptively place the culpability elsewhere? Does it seem fair and reasonable to exacerbate some people’s blind and misdirected anger by fallaciously claiming that the pension systems are the cause for the State’s chronic budget deficit?  Is it because some people do not want teachers and other public employees to have a pension?

Consider this: the teachers’ pension was originally established to keep college-educated people working in a difficult and stressful job without the higher salary, benefits, and bonuses commonly rewarded to comparably-educated workers in the private sector. Jim Mosman of the National Council on Teacher Retirement states: “Teacher defined-benefit pensions are smart, effective tools to help keep teacher recruitment and retention costs as low as possible, providing modest, dependable retirement security at about half the cost to taxpayers of other pension models” (National Institute on Retirement Security).

According to the National Institute on Retirement Security, “The over $175 billion in annual benefit distributions from pension trusts are a critical source of economic stimulus to communities throughout the nation and act as an economic stabilizer in difficult financial times. Recent studies have documented public retirement system pension distributions annually generate over $29 billion in federal tax revenue, more than $21 billion in annual state and local government tax revenue, and a total economic impact of more than $358 billion” (Pensionomics: Measuring the Economic Impact of State and Local Pension Plans).

Why are teachers’ pensions the blame for the State’s financial quagmire when Illinois legislators have consistently failed to fully fund the Teachers Retirement System for decades but, instead, have diverted its “constitutional and obligatory” contributions to other “operating expenses” and “special” interests? TRS has depended mostly upon income from its own responsible investments and its contributions from its membership throughout these years.  “The majority of these trust fund monies – 72 percent for the period from 1982 to 2008 – are made up of employees’ contributions and investment earnings” (US Bureau of the Census, “State and Local Government Employee Retirement Systems”).

Consider that Illinois has not paid its annual pension bill in full for decades and has used reverse compounding as well: “A pension plan's obligations are determined in part by the expected investment return on its assets. In the case of Illinois, that is 8.5%. So for every dollar not added to assets in time, the state is effectively borrowing from the [TRS] pension plan at 8.5% interest” (Business Week).

How many billions of dollars has the State of Illinois saved by not paying what the teachers’ pensions should have rightfully received?  According to Bob Lyons, a TRS Board Trustee, “It is a number that could be debated, but our staff determined that since 1953, the State has saved $14,842,226,632 by not paying what the actuaries calculated we should have received.  We have been the State’s credit card.”

What is the blame for the State’s budget disaster? The State’s antiquated revenue system.  “The State’s failure to make its required employer contributions to the five pension systems can be traced to one, simple cause: a state fiscal system that is so poorly designed for decades failed to generate enough revenue growth to both maintain service levels from one year to the next and cover the state’s actuarially-required employer contribution to its five pension systems” (Charles N. Wheeler III, Director of the Public Affairs Reporting program at the University of Illinois Springfield).