Time is running out. The Department of Justice must indict and convict Trump (by Laurence H. Tribe and Dennis Aftergut) 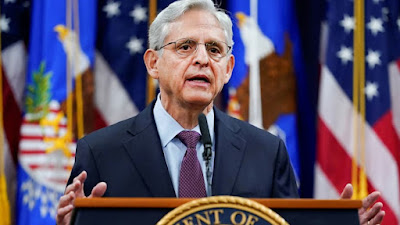 If Trump or any of the likely Republican nominees win in 2024, they will immediately move to protect those who attempted to overturn the 2020 election.

On Tuesday CNN reported that key January 6 texts have been erased by officials of Donald Trump’s defense department in addition to homeland security and the Secret Service. Not even a clueless Hamlet could avoid smelling “something rotten in the state of Denmark”.

With the growing list of deletions, there is a whole new criminal conspiracy to investigate: one to destroy evidence of the grave federal crimes already under investigation. Nothing so focuses the prosecutorial mind or underscores the need to accelerate a criminal investigation as evidence that the investigation’s target may have plotted to erase the proof of his wrongdoing that is needed to hold him accountable.

The attorney general, Merrick Garland, knows that the fish always rots from the head. On 26 July, the Washington Post broke news that the justice department’s investigation is focused on Donald Trump himself. Time is of the essence in bringing his case to indictment.

Indeed, a moving target who gives every indication that he plans to strike again must trigger a different cost-benefit calculus in the inevitable debates both within and outside the justice department about when enough proof has been gathered to indict responsibly – and when it would be a dereliction of duty to delay further.

The former president’s insistence that he has nothing to be remorseful about (other than not marching to the Capitol) makes that debate seem academic. And the steps being taken at his behest even now in battleground states to replace 2020’s failure with 2024’s success redouble the urgency. Shakespeare’s Brutus had it right when he said, in Julius Caesar: “We must take the current when it serves, or lose our ventures.”

In these circumstances, prudence counsels running the clock backwards to set clear benchmarks for moving forward. Any calculation of how to proceed must start with two pessimistic premises. First, that Trump will run in 2024 and could win. Second, that if any of the likely Republican nominees wins, the next administration will be one that is eager to scrap any prosecution of the last.

Hence, the goal must be to secure a conviction before November 2024, and in any event, no later than 20 January 2025, when the next presidential term begins. It is already too late for all appeals from any such conviction to be exhausted by that date, but the key to holding the chief conspirator accountable is a jury verdict of guilt.

Consider this: the trial of insurrectionist Guy Reffitt occurred 13 months after his original indictment. That trial, and its delaying pre-trial motions, were incalculably less complex than Trump’s would be. One can easily anticipate motions that, if denied, might go far up the appellate chain.

It is not hard to imagine a majority of supreme court justices in no great hurry to resolve motions upon which the start of trial could depend. One can easily conceive a 20-month or longer period with the former president indicted but not yet tried. If Trump is not formally charged until January 2023, that would imply a multi-month trial starting in September or October. Should he run for president and win in November, we would have a president-elect in the middle of a criminal trial.

Part of why a lengthy post-indictment/pre-verdict period is foreseeable is that federal district courts are bound to protect an accused’s rights to full airing of pre-trial claims and the time needed to file and argue them. Trump will have many pre-trial claims, setting out his serial and inexhaustible list of grievances, the imagined violation of his rights, his purported immunity from prosecution as a former president and the overriding unfairness of it all.

Some district court judges more than others will balance protections for the accused with accountability’s pragmatic need for speed. Importantly, even the four Trump-appointed district court judges in DC have often shown little sympathy for those charged with perpetrating the events of January 6 or resisting their investigation. On 1 August, Judge Dabney Friedrich sentenced Reffitt to more than seven years in prison, the longest sentence to date.

Judge Tim Kelly refused to dismiss indictments against Proud Boy leaders who were part of the January 6 siege. Judge Carl Nichols brooked no nonsense in Steve Bannon’s July trial, deliberately preventing it from becoming the “political circus” Bannon sought to make it.

On the other hand, among eight judges who have considered defendants’ motions to dismiss federal charges of obstructing an official government proceeding – Congress’s January 6 election certification session – Nichols was the lone outlier who dismissed the count. That is one of the main charges that observers believe federal prosecutors could bring against Trump.

The point is that if Trump were to be indicted, the Department of Justice cannot count on a favorable judge putting it on a jet stream to an actual trial. So what does that mean for precisely when Trump must be formally indicted?

Thankfully, it doesn’t imply the impossible. The Department of Justice could pull an experienced prosecutor or two from every US attorney’s office and put them together on the case.

With all stops pulled, prosecutors still have time to do what is needed before year end. The tasks include talking to witnesses that the January 6 House committee interviewed and deposed, which is well under way. Cassidy Hutchinson, principal aide to Trump’s chief of staff Mark Meadows, and Vice-President Mike Pence’s top aides, Marc Short and Greg Jacobs, are now working with the Department of Justice or appearing before its grand jury.

Cooperation is already reported to have begun among the lawyer-enablers of Trump’s coup plotting. With the investigation’s accelerating aim at Trump, every potential target’s defense counsel has surely discussed with the target the advantages of an early offer to plead guilty and cooperate. Early birds get better worms.

On 2 August, the federal grand jury investigating the lead-up to the January 6 insurrection subpoenaed the former White House counsel Pat Cipollone. Department of Justice prosecutors are reported to be preparing to go to court to secure his testimony about his conversations with Trump if Cipollone again declines to disclose them on grounds of executive privilege.

The task ahead is massive, but if attacked with supreme urgency, it can get done. The building blocks for a trial of Donald Trump must be put into place with alacrity. In no case more than this one, the perfect cannot be the enemy of the good. The clock is ticking.

Let us not forget Trump’s autocratic abuse of presidential power, his constitutional ignorance, his obstruction of justice and concealment, his lawless demagoguery, his pathological narcissism, his grandiose delusions, his anti-social personality disorder, his malignant arrogance, his moral relativism, his white nationalism, his perfidious nationalism, his hateful racism, his infectious nihilism, his outrageous iconoclasm, his ruthless competition, his puerile dereliction, his embarrassing idiocy, his provocative transgressions, his mocking disrespect, his impetuous vulgarity, his sexual predation; his belligerent intimidation, his incessant lying, his conspiratorial gaslighting, his obsessive vindictiveness, his hypocritical cowardice, his compulsive xenophobia, his callous misogyny, his insufferable bigotry, his disgusting buffoonery, his histrionic rallying, his dangerous idiocy, his sociopathic bullying and seditious behavior…! This is why Donald Trump must be indicted so he (and others like him) can never covet the highest and most respected office in America again.

Why Donald J. Trump Is a Threat to Our Democracy and Unfit to be President of the United States of America by Glen Brown: