The Rise and Fall of Tom Engelhardt (and So Much Else) 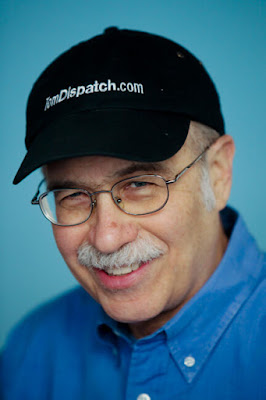 ...To speak personally, I find myself experiencing three versions of that ultimate story: that of my own fall; that of my country; and that of an increasingly overheating planet as a habitable place for us all. With that in mind, let me take you on a brief trip through those three strangely intertwined tales, starting with me.

I was born in July 1944 into an America that had been roused from a grotesque depression, the “Great” one as it was known, and was then being transformed into a first-rate military and economic powerhouse by World War II. (My father was in that war as, in her own fashion, was my mother.) That global conflict, which mobilized the nation in every way, wouldn’t end until, more than a year later, two American B-29s dropped newly invented weapons of disastrous destructive power, atomic bombs, on the Japanese cities of Hiroshima and Nagasaki, more or less obliterating them.

In those acts, for the first time in history, lay the promise of an ultimate end to the human story of a sort once left to the gods. In other words, V-J (or Victory over Japan) Day instantly had an underside that couldn’t have been more ominous.

I was born, then, into a newly minted imperial power already exhibiting an unparalleled global punch. Soon, it would face off in a planet-wide struggle, initially focused on the Eurasian continent, against another superpower-in-the making, the Soviet Union (and its newly communized Chinese ally).

That would, of course, be the not-quite-world war (thanks to the threat of those nuclear weapons, multiplied and improved many times over) that we came to call the Cold War. In it, what was then known as the “free world” — although significant parts of it were anything but “free” and the U.S. often worked its wiles to make other parts ever less so — was set against the communized “slave” version of the same.

In the United States, despite fears of a nuclear conflict that left children like me “ducking and covering” under our school desks, Americans experienced the hottest economy imaginable. In the process, an ever wealthier society was transformed from a good one into — as President Lyndon Johnson dubbed it in 1964 — the Great Society. Despite “red scares” and the like, it was one that would indeed prove better for many Americans, including Blacks in the wake of a Civil Rights Movement that finally ended the Jim Crow system of segregation that had succeeded slavery.

In the process, the U.S. developed a global system around what was then called the “Iron Curtain,” the lands the Soviet Union controlled. It would be anchored by military bases on every continent but Antarctica and alliances of every sort from NATO in Europe to SEATO in Southeast Asia, as well as secretive CIA operations across much of the globe.

As for me, I, too, was still rising (though sometimes, as in the Vietnam years, in full-scale protest against what my country was doing in the world), first as a journalist, then as an editor in publishing. I even wrote a version of the history of my times in a book I called The End of Victory Culture: Cold War America and the Disillusioning of a Generation.

Little did I know then quite how disillusioning the world we were creating would turn out to be. Meanwhile, in the 1980s and ’90s, during the presidencies of Ronald Reagan and Bill Clinton, during what came to be known as the neoliberal moment, another kind of rise became more evident domestically. It was of a kind of corporate wealth and power, as well as a growing inequality, previously unknown in my lifetime.

In 1991, when I was 47 years old, the Cold War suddenly ended. In 1989, the Red Army had limped home from a decade-long disastrous war in Afghanistan (from which, of course, Washington would turn out to learn absolutely nothing) and the Soviet Union soon imploded. Miracle of miracles, after nearly half a century, the United States was left alone and seemingly victorious, “the sole superpower” on Planet Earth.

The former bipolar world order was no more and, in the phrase of conservative Washington Post columnist Charles Krauthammer, we were now in “the unipolar moment.” Uni because there was only one power that mattered left on this planet. Admittedly, Krauthammer didn’t expect that uni-ness to last long, but too many politicians in Washington felt differently.

As it turned out, the top officials in the administrations of Bush the elder and then Bush the younger had every intention of turning that moment of unparalleled global triumph into a forever reality. What followed were wars, invasions, and conflicts of every sort meant to cement the global order, starting with President George H.W. Bush’s Operation Desert Storm against Saddam Hussein’s Iraq in 1991, which (sadly enough) came to be known as the first Gulf War.

Hence, too, the missing “peace dividend” that had been promised domestically as the Cold War ended. Hence, too, after “peace” arrived came the never-ending urge to pour yet more taxpayer dollars into the Pentagon, into a “defense” budget beyond compare, and into the weapons-making corporations of the military-industrial complex, no matter what the U.S. military was actually capable of accomplishing.

All of this was to be the global legacy of that sole superpower, as its leaders worked to ensure that this country would remain so until the end of time. A decade into that process, horrified by the response of Bush the younger and his top officials to the 9/11 attacks, I created TomDispatch, the website that would see me through my own years of decline.

Keep in mind that, in those years of supposed triumph, the third decline-and-fall story was just beginning to gain momentum. We now know that climate change was first brought to the attention of an American president, Lyndon Johnson, by a science advisory committee in 1965. In 1977, Jimmy Carter, who two years later would put solar panels on the White House (only to have them removed in 1986 by Ronald Reagan), was warned by his chief science adviser of the possibility of “catastrophic climate change.”

And yet, in all the years that followed, remarkably little was done by the sole superpower, though President Barack Obama did play a key role in negotiating the Paris Climate agreement (from which Donald Trump would dramatically withdraw this country).

In its own fashion, Trump’s victory in 2016 summed up the fate of the unipolar moment. His triumph represented a cry of pain and protest over a society that had gone from “great” to something far grimmer in the lifetime of so many Americans, one that would leave them as apprentices on what increasingly looked like a trip to hell.

That narcissistic billionaire, ultimate grifter, and dysfunctional human being somehow lived through bankruptcy after bankruptcy only to emerge at the top of the heap. He couldn’t have been a more appropriate symptom and symbol of troubled times, of decline — and anger over it. It wasn’t a coincidence, after all, that the candidate with the slogan Make America Great Again won that election. Unlike other politicians of that moment, he was willing to admit that, for so many Americans, this country had become anything but great.

Donald Trump would, of course, preside over both greater domestic inequality and further global decline. Worse yet, he would preside over a global power (no longer “sole” with the rise of China) that wasn’t declining on its own. By then, the planet was in descent as well. The American military would also continue to demonstrate that it was incapable of winning, that there would never again be the equivalent of V-J Day.

Meanwhile, the political elite was shattering in striking ways. One party, the Republicans, would be in almost total denial about the very nature of the world we now find ourselves in — a fate that, in ordinary times, might have proven bad news for them. In our moment, however, it only strengthened the possibility of a catastrophe for the rest of us, especially the youngest among us.

And yes, recently West Virginia coal magnate Joe Manchin finally came around (in return for a barrel full of favors for his major donors in the oil and gas industry), but the country that created the Manhattan Project that once produced those atomic bombs is now strangely unrecognizable, even to itself.

During World War II, the government had poured massive sums of money into that effort, while mobilizing large numbers of top scientists to create the nuclear weapons that would destroy Hiroshima and Nagasaki. To this day, in fact, it still puts staggering sums and effort into “modernizing” the American nuclear arsenal.

When it comes to saving the world rather than destroying it, however, few in Washington could today even imagine creating a modern version of the Manhattan Project to figure out effective new ways of dealing with climate change. Better to launch a dreadful version of the now-ancient Cold War than deal with the true decline-and-fall situation this country, no less this civilization, faces.

Admittedly, though I recently stumbled across something I wrote in the 1990s that mentioned global warming, I only became strongly aware of the phenomenon in this century as my own decline began (almost unnoticed by me). Even when, at TomDispatch, I started writing fervently about climate change, I must admit that I didn’t initially imagine myself living through it in this fashion — as so many of us have in this globally overheated summer of 2022.

Nor did I imagine that such devastating fires, floods, droughts, and storms would become “normal” in my own lifetime. Nor, I must admit, did I think then that the phenomenon might lead to a future all-too-literal end point for humanity, what some scientists are starting to term a “climate endgame” — in other words, a possible extinction event.

And yet here we are, in a democratic system under unbelievable stress, in a country with a gigantic military (backed by a corporate weapons-making complex of almost imaginable size and power) that’s proven incapable of winning anything of significance, even if funded in a fashion that once might have been hard to imagine in actual wartime.

In a sense, its only “success” might lie in its remarkable ability to further fossil-fuelize the world. In other words, we now live in an America coming apart at the seams at a moment when the oldest story in human history might be changing, as we face the potential decline and fall of everything.

One thing is certain: as with all of us, when it comes to my personal story, there’s no turning around my own decline and fall. When it comes to our country and the world, however, the end of the story has yet to be written. The question is: Will we find some way to write it that won’t end in the fall not just of this imperial power but of humanity itself?

Tom Engelhardt is the author of a highly praised history of American triumphalism in the Cold War, The End of Victory Culture.  A fellow of the Type Media Center, his sixth and latest book is A Nation Unmade by War.