Please support House Resolution 1, introduced by House Democrats on January 3, 2019, by calling your senator and representative 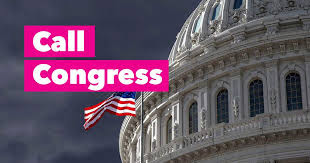 “VOTING AND ELECTIONS LAWS: Voter registration would be made easier. Citizens could register online or get registered automatically, via data from driver's licenses or other government sources. For federal elections, states would have to provide same-day registration and at least 15 days of early voting. Election Day would be a federal holiday.
“The bill would crack down on efforts to take voters off the rolls or prevent them from casting ballots. Felons could regain their voting rights after finishing their sentences.
“Federal elections would require paper ballots to prevent computer tampering. State chief election officials couldn't get involved in federal campaigns.
“The bill would declare an intent to revive core anti-discrimination provisions of the Voting Rights Act of 1965 that were effectively shut down by the Supreme Court six years ago. It would also state that failing to vote isn't grounds for taking away a person's voter registration.
“CAMPAIGN FINANCE REFORM: Provisions from the Disclose Act would expand the prohibition on foreign political money and mandate the disclosure of the big donors behind politically active 501(c) (4) social welfare organizations.
“Digital companies, like Facebook and Google, would have to set up public databases cataloging political ad purchase requests of $500 or more and create new measures to block ad buys by foreign nationals.
“Presidential inaugural committees would have to disclose expenditures, in addition to the existing requirement for donor disclosure. This is a response to reports of unexplained spending by Trump's inaugural committee.
“A new matching-fund program would support House candidates who agree to raise only small-dollar contributions. (Similar provisions for Senate candidates would have to come from the Senate.) The public financing system for presidential candidates, largely irrelevant since 2012, would be updated.
The bill would quash "sidecar" super PACs that support individual candidates.
“ETHICS: Presidents and vice presidents would have to release their tax returns, something that happened routinely in past administrations but not in this one.
“Presidents-elect would need ethics plans for their transition teams and would have to file financial disclosures within 30 days of taking office. The bill would tell presidents and vice presidents they should act as if they are covered by the conflict-of-interest law, which actually exempts them. Again, this wasn't an issue in previous administrations because past presidents did not have the volume of business entanglements that Trump has.
“House members would be barred from serving on corporate boards. Rep. Chris Collins, R-N.Y., is under indictment for allegedly using inside information he gained as a corporate board member.
“House members would be forbidden to use taxpayer money to pay penalties for employment discrimination. Former Rep. Blake Farenthold, R-Texas, used $84,000 in federal funds to settle a sexual harassment claim by a former staffer, said he would repay it, but changed his mind after leaving office. Congress passed a bipartisan measure in December requiring members to pay out of their own pocket for some settlements and court judgments in sexual misconduct cases.
“The Supreme Court would have to establish a code of ethics, something it has never had. The laws regulating foreign and domestic lobbying would be expanded” (NPR).

Pass this on to your friends. Thank you.
To read more about HR 1, click here.