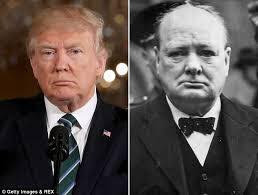 “As a young man, Churchill actually fought in wars on the frontline, especially in South Africa. He risked his life on a daily basis in the Boer Wars. (Let’s leave aside the actual moral dimensions of that conflict for the time being.) He could have easily avoided frontline service, given his family connections. But he fought for his nation. He risked his own physical life.

“Trump took five deferments so he would not go to Vietnam, including some for bone spurs. His so-called bone spurs have not inhibited his endless golf playing ever since.

“While he was out of power, Churchill desperately warned his country about the Nazi threat.

“Out of power, Trump whined about Obama’s birth certificate. Most recently, he told our country that there were some ‘fine people’ among the Neo-Nazi marchers in Charlottesville.

“Churchill switched political parties a few times in his life and was never completely trusted by the Tories or by Labor. However, when his time came to become Prime Minister, he worked across political boundaries to form national governments when the nation faced a crisis that held through the war.

“Trump has been relentlessly partisan and has managed to create division within his own party and nation as a whole.

“Churchill led his people through their darkest days. For over a year, he and Britain stood alone against the Fascist-conquered Europe and when England withstood vicious Nazi bombing of civilian centers. He told his people all he could offer was, ‘blood, toil, tears and sweat.’ He gave the British people courage when they faced danger.

“Trump exaggerates the fear of our enemies where there is little risk and exploits tragedies to manipulate fear to advance his political agenda. He said he would 'Make America Great Again' - not by asking for sacrifice and cooperation - but by scapegoating immigrants and refugees in the face of one of the worse refugee crisis of our time, and by coddling billionaires and millionaires with tax cuts.

“Churchill wrote and spoke with brilliance and eloquence. He was said to have deployed the English-language and sent it into battle. After the war was over, he produced a brilliant six-volume history of WWII. He understood the fine art of diplomacy’s nuances. He was awarded a Noble Prize for literature as much for his written work as for the totality of his achievement during humanity’s most challenging times. He faced his critics in parliament and answered them face-to-face articulately and clearly. And when the press hounded him, he accepted it as the price of democratic leadership.

“Trump basically has a ghost-written piece of trash to his credit and string of insulting 140 letter tweets to his critics.

“Churchill had one wife whom he loved dearly. Trump has had multiple wives and clearly multiple affairs.

“When he was voted out of office at the end of the war, Churchill left graciously and served his party humbly.

“Let’s hope Trump can at least do that…”