Checking the Facts of the Final Debate: A Selection of Trump’s Prevarications, Hyperboles, etcetera 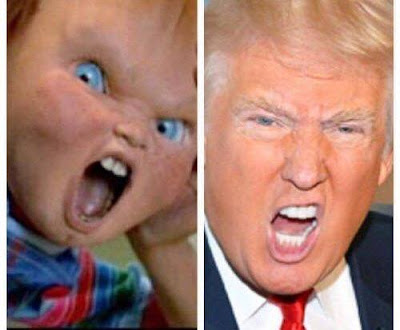 “We need a Supreme Court that in my opinion is going to uphold the Second Amendment and all amendments. But the Second Amendment, which is under absolute siege. I believe if my opponent should win this race, which I truly don't think will happen, we will have a second amendment which will be a very, very small replica of what it is right now”- Trump.

NPR: Trump has repeatedly falsely claimed that Clinton would like to abolish the Second Amendment or “take your guns away.” This is not Clinton’s position, though she does favor stricter gun regulations.

“Well, first of all she wants to give amnesty [to immigrants], which is a disaster and very unfair to all the people that are waiting on line for many, many years”- Trump.

NPR: Hillary Clinton has not proposed offering amnesty to immigrants in the U.S. illegally. Her immigration platform says she would defend and expand President Obama’s executive action of November 2014. His actions, thwarted by federal courts, would protect an estimated 5 million such immigrants and parents from deportation and offer them renewable work permits, not citizenship. Amnesty is different. Ronald Reagan’s 1986 Immigration Reform and Control Act legalized and ultimately granted citizenship to immigrants in the country illegally who met certain criteria.

“The border secure as you know the border patrol agents sixteen thousand five hundred plus, ICE endorsed me. First time they've ever endorsed a candidate”-Trump.

“We need the wall the border patrol, ICE, they all want the wall”-Trump.

“The NAFTA deal signed by her husband is one of the worst deals ever made of any kind of signed by anybody”-Trump.

NPR: The first President H.W. Bush signed the actual trade agreement, which then had to be ratified by both chambers of Congress. President Clinton signed that ratification.

“He [used] undocumented labor to build the Trump Tower. He underpaid undocumented workers and when they complained, he basically said what a lot of employers do: 'you complain; I’ll get you deported'"- Clinton.

NPR: In 1980, a contractor working for Trump hired Polish workers in the country illegally to clear the site on Fifth Avenue in Manhattan where Trump Tower would later be built. The contractor was later fined $570,000 by federal regulators. Trump has repeatedly claimed he was unaware the workers were in the country illegally, and the truth remains somewhat murky. But some published reports have suggested Trump not only knew about the workers’ status but instigated their hiring. There were also reports that he threatened to turn the workers in to immigration authorities after some complained about work conditions.

NPR: PolitiFact lists several instances in which Trump has talked about having some sort of contact with Putin.

NPR: The New START limits the U.S. and Russia to 1,500 deployed strategic nuclear weapons on the nations’ land- and sea-based missiles and aboard its bombers. The treaty did not cover smaller tactical weapons, however.

“When I said Japan and Germany -- and I'm not just singling them out but South Korea -- these are very rich powerful countries. Saudi Arabia -- nothing but money, we protect Saudi Arabia. Why aren’t they paying?”-Trump.

“Look, our country is stagnant. We've lost our jobs”-Trump.

NPR: There are 10.7 million more people working today than when President Obama took office. Employers have added 15 million jobs since the trough of the recession in 2010. For comparison: Jobs per year was strongest under Bill Clinton (2.8 million), followed by Jimmy Carter (2.6 million), Ronald Reagan (2 million), President Obama (1.4 million as of September), George H.W. Bush (659,000), and George W. Bush (160,000). Unemployment, which peaked at 10 percent in October 2009, has fallen to 5 percent.

NPR: The inspector general of the State Department found that contract files were incomplete in contracts worth more than $6 billion, but as the IG explained in this letter to the Washington Post, it is wrong to conclude that the money is missing.

“I built a massive company, a great company, some of the greatest assets anywhere in the world, worth many many billions of dollars”-Trump.

NPR: Because Donald Trump has refused to release his tax returns — in defiance of tradition dating back four decades — we don’t know as much as we’d like about his business empire or his personal wealth. Much of his business is conducted through the privately held Trump Organization. But investors in his first public company, Trump Hotels and Casino Resorts, lost a lot of money, even as Trump himself was handsomely rewarded. The public company lost money every year Trump ran it, loaded up his Atlantic City casinos with costly debt, and ultimately filed for bankruptcy. Trump has blamed the downfall on broader forces affecting Atlantic City. But he also drained cash out of the business to pay personal debts and support his lavish lifestyle. Contractors, including small businesses, lost money along with Trump’s investors. Trump also forced an investment firm to fire an analyst, Marvin Roffman, who had warned that the business was unsustainable. Trump has been sued by the New York attorney general for allegedly defrauding students at Trump University, by investors who bought into failed condominium projects bearing the Trump name, and contractors who say he refused to pay them. Trump boasts that he never settles lawsuits, but in fact he has settled at least 100 lawsuits, as USA Today reports.

NPR: The U.S. completed withdrawing troops from Iraq in 2011 under a deal signed by President Bush and at the request of the Iraqi government. When the civil war started in Syria next door, it provided a haven for militants from Iraq and Syria who took parts of Syria and moved into Iraq. Many analysts say the presence of U.S. troops might have kept ISIS from gaining so much ground in Iraq, but the group also took advantage of old divisions within Iraqi politics and sectarian groups.

“Well, at the last debate we heard Donald talking about what he did to women. And after that, a number of women have come forward saying that's exactly what he did to them. Now what was his response? Well, he held a number of big rallies where he said that he could not possibly have done those things to those women because they were not attractive enough for them to be assaulted”- Clinton.

“I did not say that”-Trump.

NPR: It appears that he did, and one of his top surrogates has said that he did. While Trump is technically correct that he did not use the exact phrasing that Clinton used to paraphrase his remarks, he did seem to criticize the appearances of women making the accusations. Regarding one of the women, a former writer for People magazine, Trump said, “Look at her” and “I don’t think so” while referring to her at a recent rally. Regarding Jessica Leeds, the woman who accuses Trump of groping her on an airplane decades ago, Trump said, “Believe me, she would not be my first choice.” If there was any doubt about Trump’s intended meaning, his attorney and surrogate Michael Cohen told CNN that “these aren’t even women that he’d be attracted to. … I think what Mr. Trump is really trying to say is that they’re not somebody that he would be attracted to, and therefore, the whole thing is nonsense.”

“She mentions this - which is all fiction -- all fictionalized -- probably or possibly started by her and her very sleazy campaign but I will tell you what isn’t  fictionalized are her e-mails, where she destroyed thirty three thousand e-mails criminally criminally after getting a subpoena from the United States Congress. What happened to the FBI, I don't know. We have a great general - four-star general - today you read it in all the papers, going to potentially serve five years in jail for lying to the FBI one lie. She's lied hundreds of times to the people, to Congress, and to the FBI. He's going to probably go to jail. This is a four-star general and she gets away with it and she can run for the presidency of the United States”-Trump.

NPR: The Justice Department closed the investigation of Clinton’s private email server with no criminal charges. FBI Director James Comey criticized her for “extremely careless” practices but went on to say “no reasonable prosecutor” would have brought such a case. The director said Clinton did not lie to agents in her 3 1/2-hour interview. Meanwhile, this week Retired Gen. James Cartwright pleaded guilty to a single false statements charge for lying to the FBI about his contacts with reporters in the course of a media leaks investigation. Under sentencing guidelines, he very likely faces between zero and six months in prison.

NPR: Donald Trump last contributed to his own foundation in 2008. Since then, all the money has been contributed by others.

NPR: Actually, the U.S. has taken in 12,500 Syrian refugees in the past year and far fewer in the previous four years of the war, even as millions fled, overwhelming neighboring countries. The refugees who come to the U.S. go through a lengthy vetting process, including security and health checks. The State Department and advocates of the refugee program say that refugees go through more vetting than any other traveler to the U.S.

“And one thing we have to do, repeal and replace the disaster known as Obamacare”-Trump.

NPR: Approximately 20 million people who did not have insurance previously have gained coverage under the Affordable Care Act. About half of those people purchased insurance through the Obamacare exchanges, and the rest have insurance through Medicaid expansion or because they are covered under their parents’ plans. However, the ACA exchanges are showing signs of strain. Three major insurers have pulled back on their participation in the exchanges dramatically for 2017, leaving many markets with only one insurer selling health plans through the exchanges.

“We need law and order. But we need justice too. Our inner cities are a disaster. You get shot walking to the store”-Trump.

NPR: Violent crime rose in 2015, but the nation remains far safer than it was 30 or 40 years ago [unless you live in such areas of Chicago like Austin, Englewood, Garfield Park, North Lawndale, Humboldt Park, Roseland, New City, and Grand Crossing...]. Crime is primarily the responsibility of state and local governments, not the federal government or the White House.

Forecast Impact on Revenues and Debt over Next Decade: