The Iceman Cometh No More

He was snatched from death in 1991 completely outfitted
with the implements of everyday existence 5300 years ago
on the border between Austria and Italy...
except for penis and scrotum.
--from a news story 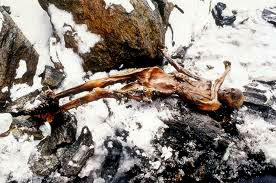 Had the sloe berry and mushroom eater
arisen from his carved stillness
amid an ejaculation of protests
over custody rights in a room too bright to focus,

he may have groped for his lucky charm
to uncast the spell;
he might have known what to barter:
copper ax and rucksack for tissue and pouch.

But curiosity erected a jackhammer’s sadness,
a refrigerator’s hum,
and a table souvenir like a displaced part of desire
found at the edge of a melting glacier—
the leather quiver without an arrow.

“The Iceman Cometh No More” was originally published by Thorntree Press in Troika IV, 1994.