Pension Reform, the Civic Committee, and the Chicago Tribune, et al. vs. Your Financial Security 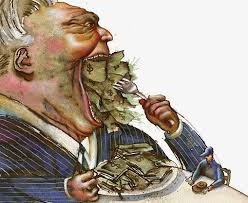 First, let us not forget that one of the main causes of the budget crisis and lack of revenue in Illinois is the State’s erratic and irresponsible annual contribution payments to the public pension plans (National Institute on Retirement, May 2011).  Add wide-spread corporate financial corruption that created the financial crisis of 2007-09 and; thus, there are rampant foreclosures, stagnant unemployment, and the outsourcing of jobs while tax breaks for the wealthy persists.


According to Time (June, 2011), “There may be $2 trillion sitting on the balance sheets of American corporations globally, but firms show no signs of wanting to spend it in order to hire workers at home… The companies that [do] business in global markets, including manufacturers, banks, exporters, energy firms and financial services, contribute almost nothing to overall American job growth… There is a fundamental disconnect between the fortunes of American companies, which are doing quite well, and American workers…”
Now add to this calamity corporate-owned media and their attacks on public sector’s pension plans and media's attempts to shift the blame for today’s financial problems on public sector workers and retirees, and we have a distortion of cause-and-effect reasoning with malicious intent.

Combine corporate-backed legislators that use selected instances of doom and gloom forecasts to seek radical changes to the defined-benefit pension plan in Illinois, and the deceitful practice of corporate financial firms that attempt to peddle a defined-contribution savings plan (or 401(k)) as the panacea for the State’s budget deficit so that corporations and investment firms can continue to profit from this predicament, and we have a even larger injustice to address.
According to Communications Workers of America, we cannot afford to sit back and allow this to happen.  What needs to be done is to maintain, enlarge and support a state-wide coalition and solidarity (such as We Are One), and to protect our defined-benefit pension plans against opportunistic legislators and wealthy interest groups such as the Civic Committee of the Commercial Club of Chicago (Illinois Is Broke), the Civic Federation, Illinois Policy Institute, National Taxpayers United of Illinois, the Chicago Tribune and their ilk.

The State’s focus should be on the “fundamental disconnect” and a long-term economic policy by promoting structural reforms (American Enterprise Institute, June 2011) and not on any unwarranted modification or elimination of pension benefits perpetuated through corporate, fallacious deflection and blame.
Consider that increasing current employee contributions and reducing benefits for future employees do not address the current unfunded liabilities in Illinois. Why? Because the State has revenue and debt problems. Furthermore, the issuance of bonds to reduce the pension system’s unfunded liability “assumes that the State will earn a higher return on the bond proceeds than the cost of borrowing” (Barclays Capital, May 2011).  It is estimated that “pension contributions and debt service on pension obligation bonds will account for more than 20% of the State’s FY12 general funds’ tax revenues” (Barclays Capital).
Although only 15 states have a funded ratio over 70% (Barclays Capital), funded ratios are, nevertheless, unpredictable, and long-term liabilities are subject to changing variables.  Moreover, investment returns can overstate or understate liabilities.  What may be closer to anything resembling truth is that the State has control over its revenue and spending and can improve funding instead of lowering benefits (Fitch Report, January 2011).
Unfortunately, we have to trust that summer legislative meetings in Springfield include not only intelligent and competent worker representation at the “negotiation” table but non-partial, independent professional finance analysts, such as Ralph Martire from the Center of Budget and Tax Accountability, who can competently scrutinize the State’s “unsustainable” fiscal problems. We have to insist that honest lawyers, such as Eric M. Madiar or others like him, are also present to safeguard the public employees’ contractual relationship with the State and to protect teachers, retirees, and other public employees against unnecessary and unreasonable changes to pension benefits. Finally, we have to believe that long-term retirement income security will never be “constitutionally” compromised but preserved.
It is imperative for all of us to inform our neighbors, friends, and legislators about the injustices perpetrated by prejudicial, wealthy organizations in Illinois and to educate our neighbors, friends, and legislators about the conflicting data regarding sustainability of defined-benefit pension plans.

What continues to be at stake is the protection of the financial future of the majority of citizens not only in Illinois but in this entire country.

Corporate/legislative attempts to shift the blame and the burden of financial deficits to the middle-class by eliminating fundamental state services and diminishing crucial retirement securities while CEOs and wealthy Americans continue to not pay their fair share create a travesty of justice (Communications Workers of America, 2010).