Spread the Burden of Taxes and Address Tax Inequities in Illinois… 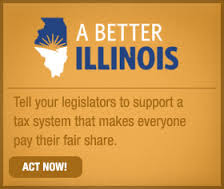 “Everyone is concerned about the state’s ability to pay its unfunded pension liability over time. The truth is that when compared to the state’s projected revenue growth, the state’s required pension contribution may be more manageable than many believe” (Illinois Retirement Security Initiative, a Project of the Center for Tax and Budget Accountability 2011).

We know that the state’s revenue already includes various types of taxes, such as property, sales, excise, individual income and corporate income. Illinois’ revenue system also receives federal aid and other miscellaneous sources of income, to name just a few.

“Even Illinois, [with] the most underfunded pension plans in the country, would only have to boost tax revenue by less than 0.2 percent over the next 30 years to meet its projected shortfalls” (Dean Baker, Co-Director at the Center for Economic Policy and Research).

How might this be accomplished? According to the National Conference of State Legislatures (June 2007), “A high-quality revenue system relies on a diverse and balanced range of sources… If reliance is divided among numerous sources and their tax bases are broad, rates can be made low in order to minimize the impact on behavior. A broad base itself helps meet the goal of diversification since it spreads the burden of the tax among more payers than a narrow basis does. And the low rates that broad bases make possible can improve a state’s competitive position relative to other states.”

In accordance with these statistics, the Center on Budget and Policy Priorities (July 2009) proclaims that “a majority of states apply their sales tax to less than one-third of 168 potentially-taxable services. Five of the 45 states with sales taxes impose them on fewer than 20 services… Research finds that purchases of some services do not fall as precipitously as durable goods purchases do when the economy slows nor rise as rapidly when the economy is booming” (Federation of Tax Administrators). States that do not tax services, such as Illinois, “probably could increase [its] sales tax revenue by more than one-third if [it] taxed services purchased by households comprehensively.”

The tax system in Illinois is inefficient. “The tax system itself is influencing economic activity” (CMAP) by taxing goods that are consumed rather than the consumption of resources. Furthermore, the tax system is also inequitable because “lower-income taxpayers typically spend a higher percentage of their income on tangible goods than higher-income people.”

Illinois income tax uses a single rate structure that results in low-income wage earners paying more taxes than the wealthy. As stated by the Institute of Taxation and Economic Policy (ITEP November 2009), Illinois is among ten states in the nation with the highest taxes paid by its poorest citizens at 13 percent.

Creating a progressive tax structure and taxing services would help rectify the tax inequities in Illinois. They would provide needed revenue to balance the State’s budget and the resources to reduce the unfunded liabilities created by past General Assemblies.